Our route crosses Ascot Racecourse. This is Crown Land to which, under the Windsor Forest Enclosure Act of 1813, the public have had continued free access to watch the races – until that is, 2012 when, following an incident involving a jogger wearing headphones (who failed to notice the convoy that follow the horses on the perimeter road) a pass system was introduced for residents on certain racedays.

However walkers with evidence that they intend to follow this well-waymarked section of the Three Castles Path, do not use the perimeter road and should not be affected but held up for a few moments perhaps if racing is in progress, to allow the horses to thunder past.

Nobody should be affected by these restrictions whenever the convoy uses the jump course to follow the horses; this includes the five-day Royal Ascot meeting in June.

NOTE On the second Tuesday in November, the Heath has traditionally been closed to avoid a definitive path from being established. More recently a firework display and very occasionally other events, can take place resulting in the Heath being closed for the day. 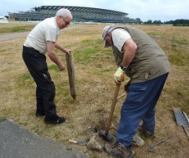 The special waymarks being replaced by Ramblers, acknowledge that we are also following remnants of an historic route - Church Path

Click for a possible alternative.
Opens in a new window

In 2005 redevelopment took place to build a new grandstand and realign sections of the racecourse
to give spectators a better view of the New Straight Mile. This also changed part of the agreed route
of the Three Castles Path shown in earlier editions of our guidebook and on OS maps. 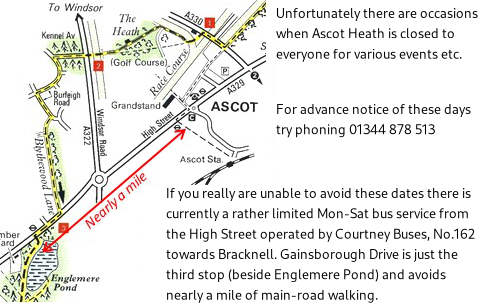